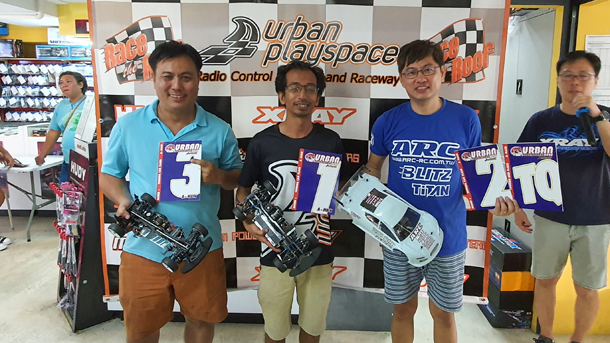 Urban Touring Series returned for the 5th season with Round 1 at Urban RC Singapore. Team ARC driver P.Y.Tang attended the race taking his Muchmore-powered ARC R11 Mid to TQ over Dominic Quek and Esmail Apandi. Running an Aluminum chassis this round instead of the standard 2mm carbon, P.Y. stated the car was more consistent and felt better over 5 minute run.

In Final A1, Esmail managed to take the win when a contact between Dominic and P.Y. resulted DNFs for both of them. P.Y. took an easy win in Final A2, when Esmail and Dominic made contact. In Final A3, Esmail found himself stuck behind P.Y. unable to pass even with a quicker car and fresher tires. Esmail eventually took the lead after a mistake from the backmarker made contact with P.Y.. Esmail went on to win the last final and P.Y. recovered 2nd.