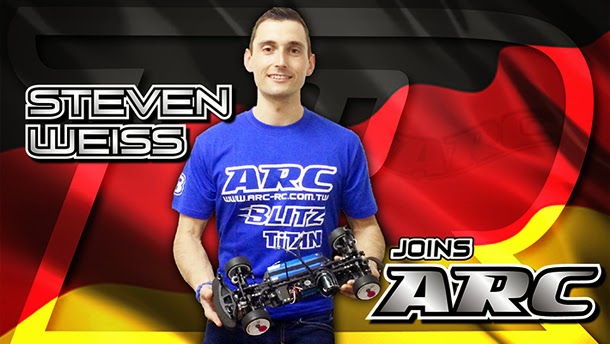 Steven Weiss from Germany joins Team ARC. After testing the ARC R10 in the Pre-ETS session, Steven was very impressed with the car. Here is what Steven has to say to his new team.

"I´m very happy to join the ARC Team with their R10 touring car. I would like to thanks Jones Chu and Henrik Heitsch for giving me this opportunity. ARC is a young company who start with their first touring car in 2012 and they improve all their products all the time. I´m already excited to work together with the entire team to improve their car and all products even more. Now i am looking forward on some great times with the team.

And a small race report from the ETS Warmup race.The next round of the ETS-Series will held in riccione/ italy on 11/12 of april. Pre-ETS was called the race last week in riccione/ italy with more than 50 drivers in 3 classes. Names like World Champion Marc Rheinard, European Champion Ronald Völker, Christopher Krapp and some more good italien drivers took the chance to find a good setup for the upcoming ets race. I set the second fastest laptime on saturday practice behind Ronald. I was really happy with the performance of the R10 the wohle day. The race conditions on sunday was very different to the day before. It was even colder and some little rain over the day made the race difficult. I finished only 1 of 3 qualifications and only 2 of 3 finals, but this given me a happy third place overall."